**I will be covering March Madness for the "Louis Live" show on TLV1.fm.  Check back here for weekly updates on March Madness.  This is the second post in the series.  Click here to read the first post.**

I released a Live Album of my Poetry!  Click HERE to check it out on iTunes today!!!

The Madness has officially begun!

After a great Championship Week that saw Virginia grab the last number one seed after every other team in the running for it faltered down the stretch, and a decent "first round" of play-in games, the round of 64 has begun in the greatest tournament in all of sports!

Billion Dollar Bracket
As millions of people know, Quicken is offering $1,000,000,000 to anybody who picks a perfect bracket.  This means if you are a savant, lucky, and blessed enough to pick every game from the Round of 64 down to the National Title Game correctly, you walk away with a cool Billion Dollars (annually over 20 years, or Five Hundred Million Dollars on the spot).

Let's get this out of the way before any of you get too excited:  nobody is going to win a Billion Dollars.  While the chances of winning are listed as one in nine quadrillion, the odds are even worse than that because Quicken Loans, Warren Buffett (who is underwriting the prize) and partner Yahoo! Sports limited the spots to 15 Million entries.  Additionally, there is no way to quantify the heightened level of play, amount of buzzer-beaters and all of the other intangible factors that contribute to March Madness being the greatest sporting event of the year--in any year.

As I'm writing this, I--along with hundreds of thousands of other fans--have already been eliminated from contention for the Billion Dollars due to Ohio State's upset at the hands of in-state foe, Dayton.  I genuinely wish those of you who are still in contention the best and hope you win the Billion Dollars, but don't get your hopes up.  I would be very surprised if anybody is perfect after the round of 32 (heading into the Sweet 16).


Pools, Pools & More Pools...& My Bracket
Luckily, although none of us will be placed into the highest tax bracket as a result of the Tourney, many of us are still in pools that give us the opportunity to win some money.  March Madness is universally loved because everybody can fill out a bracket, regardless of basketball knowledge.  There are stories of people winning their pools because they picked all of the Catholic Schools to win, picked schools with the mascots they liked best, or picked their favorite uniform color combinations.  All of these have proven to be winning strategies and this adds to the excitement.  There is something special about the way people come together to root for (and against) teams, and there is something for everybody in March.  As OMG Poetry fan Alex Poolda put it, "I'm in way too many [pools] currently.  Haha I'm gonna go broke."

Whether you have filled out a bracket for yourself for fun, a $5 per entry office pool, or spent all of your money on pools, there are thousands of options for casual fans to get involved in March.  As usual, I have joined the "Israel Sports Radio" pool on Yahoo! Sports.  My bracket is located below for your viewing pleasure.  I have shared my Bracket Soul with you, please be gentle with it. 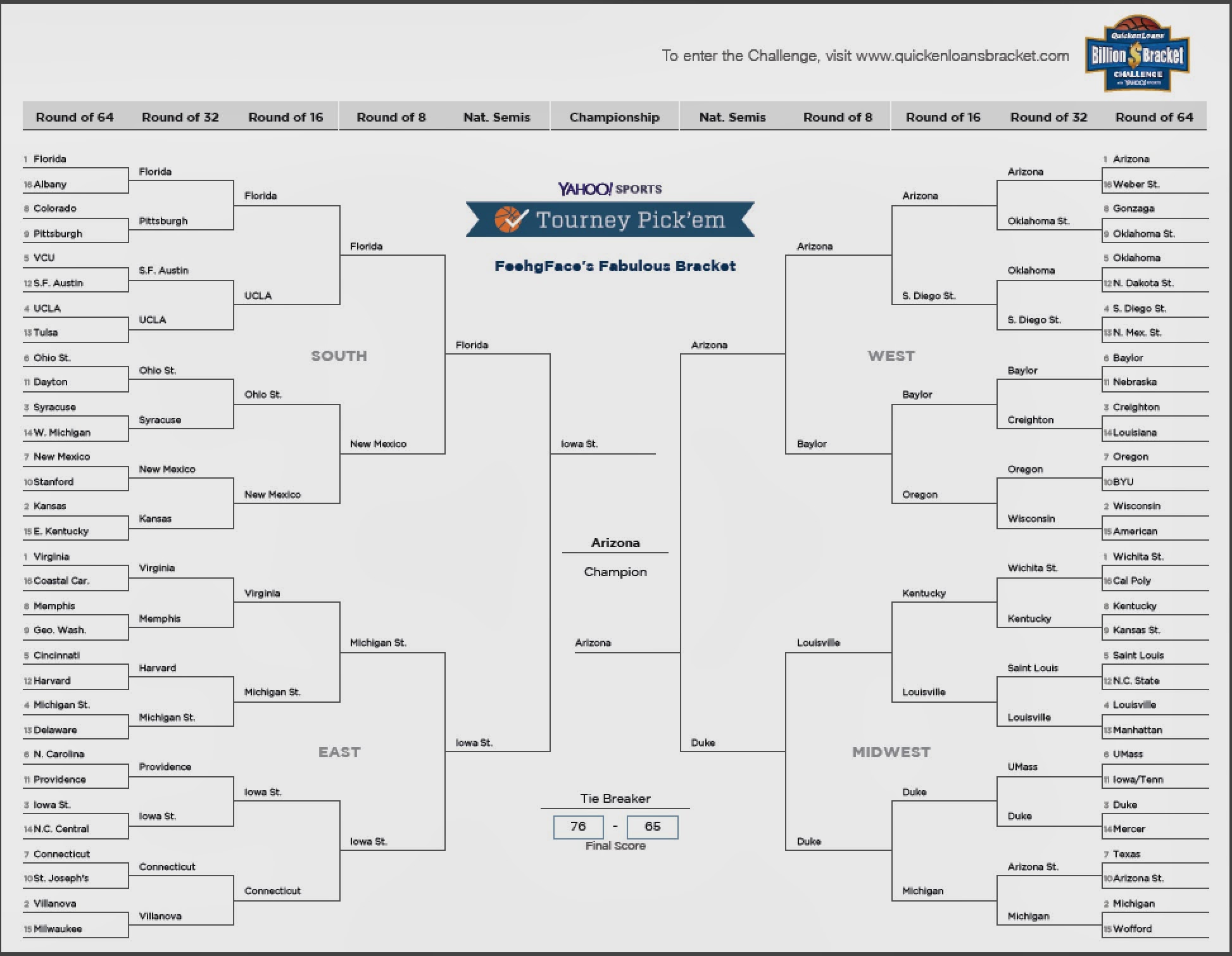 Wait, The Selection Committee Weights Regions?
There could be no Tournament without the mysterious Selection Committee who ranks each team and decides who makes the 68-team field, which teams play each other and which geographic regions they play each other in.  Every year there are many gripes and rants about teams who made the field of 68 who should not have, the teams who were snubbed by the Committee and left out of the Tournament, and the match-ups each team has.

Right after the bracket was released, there was an immediate reaction to the Midwest Region, headed by number one seed, undefeated Wichita State.  The region features three teams from last year's Final Four (Wichita St., reigning National Champions Louisville, two seed Michigan) and the always dangerous, perennial contender, Duke Blue Devils.  Athletic, talented teams have historically done well in the Tournament and the Midwest Region also includes the Kentucky Wildcats, arguably the most athletically gifted team in the Nation.  Assuming Wichita State beats upstart Cal Poly in the first round (more on that below) and Kentucky wins their first round matchup, Wichita State would have to play Kentucky in the second round.

As soon as the Selection Show finished and the bracket analysis began, NBA Legend Charles Barkley stated that he felt that Wichita State was singled out by the Committee and given the toughest bracket
because they played a weaker schedule than the other number one seeds.  I made the same argument as soon as I saw the bracket and took it a step further to explain the West region, as well.  My argument was as follows...

Wichita State earned a number one seed as the first team to make it to the Tournament undefeated in over 20 years.  Their perfect 34-0 record is impressive in any conference, mid-major or not.  They showed they were an elite team when they made a run to the Final Four as a Cinderella in last year's Tournament and they returned all of the starters from that squad and coalesced to earn their place in history entering this year's Tournament.  They are a very good team and there is no question they deserve to be a one seed.  The lone question is their strength of schedule.  Wichita State played a soft schedule because they play in a mid-major (non-power) conference that had a down year.  The Selection Committee loves to talk about how many factors go into its decisions and ranking process.  While I do not doubt the numerous factors, it is hard to ignore the fact that Wichita State, who had the weakest strength of schedule out of any one seed, was given the toughest region in the bracket by far.  It is hard to disregard the assertion that Wichita State was given the hardest strength of schedule in the Tournament, after playing a "weak" schedule of opponents during the regular season.

On the flip side, the University of Arizona arguably has the easiest road to the Final Four in Dallas.  While there are very good teams in their region and teams such as Oregon that are peaking at the right time, the region features underachieving teams, teams that Arizona is primed to beat due to its style of play and many teams lacking a bona fide superstar.  Get by Oklahoma State and star guard Marcus Smart in the second round, and there is a strong belief between pundits and fans alike that Arizona will make it to the Final Four.

Arizona is the best defensive team in the nation as measured by multiple metrics, including defensive efficiency per possession.  They were undefeated for the majority of the season, and spent eight weeks with the number one ranking in the country.  In their first loss of the season--at Cal against a tough team projected to make the Tournament at the time--Arizona lost its most versatile offensive player in forward Brandon Ashley two minutes into the game.  It was reported by halftime that Ashley had broken his foot, was scheduled to have surgery after the game and would miss the rest of the regular season and March Madness.  The Wildcats rallied in that game before ultimately losing to by two points on a buzzer beater by Cal's star guard Justin Cobbs.  Arizona regrouped without Ashley and finished the season with a record of 30-4, earning their number one seed.  Three of their four losses came by a combined nine points, including the aforementioned two-point loss at Cal, a double-overtime road loss to rivals and tournament team ASU, and a four-point loss in the PAC-12 Conference Title Game to four seed UCLA.  Many people surmise that Arizona would have joined Wichita State at 34-0, had they not lost Brandon Ashley.  It is hard to ignore the fact that Arizona was rewarded with a region fit for a team that went 34-0 in a major conference and it is hard to disregard the assertion that Arizona was given the easiest road to the Finals despite being the second overall team in the Tournament to the University of Florida.

Underachieving...For Now
In my first blog post, I was going to include a section on Michigan State with the same header as this one ("Underachieving...For Now"), about how the Spartans were underachieving, but would put things together for the Tournament like Tom Izzo coached-teams always do.  Since that blog post, Michigan State ran through the Big-10 Tournament, winning the Title and earning a four seed in March Madness in the process.  They then became the darlings of the Tournament and bracket selection process, becoming the instant favorite of many pundits to win it all.  While I personally have Iowa State beating Michigan State (as noted in my bracket above), Michigan State is a veteran team, expertly coached by a Hall of Famer who has won it all before.  Look for them to do some damage and make it to the Elite Eight, if not further.

"Cinderelly, Cinderelly"
Every year a team comes out of nowhere to surprise the world and make a deep run.  Last year it was 15 seed Florida Gulf Coast University shocking two seed Georgetown, en route to a Cinderella run to the Elite Eight.  While the potential Cinderellas will be locked down by this coming Sunday and we will know who to watch for in the Sweet 16, I have a team that I am currently rooting for with all of my Cinderella heart, and all of my Cinderella might...

The Cal Poly Mustangs have a 14-19 record.  They were 10-19 when they entered the Big West Tournament for a matchup against two seed University of California Santa Barbara.  They thrashed the Gauchos 69-38, beat the league champion Anteaters of UC Irvine in the next game, before winning the Big West Title Game against Cal State Northridge.  They carried the Big West momentum into last night's play-in game, easily handling Texas Southern despite a 38-point contribution from star Texas Southern big man Aaric Murray.  Cal Poly is now 14-19, but more importantly, they are on a four-game winning streak and they believe they can beat anybody.

No 16 seed has ever defeated a one seed and there is very little chance it will happen this year when the Mustangs lace up against Wichita State on Friday.  Having said that, I know who I'll be rooting for when the teams face off in the Midwest Region.

Until Next Time...
Enjoy your weekend of buzzer-beaters, upsets and non-stop basketball.  It's Madness Baby, Madness!!!  And this is as good as it gets.
Posted by Unknown at 5:02 PM